Trying to figure out the projector set up. There's a USB option that should run the projector without me using my minidisplayport, which should allow essentially for triple screens (laptop, IPS LED, projector), but right now I'm using VGA, it runs from the computer to the projector, then another VGA cable runs it to my the IPS LED. But it would be so much better if I could run the timeline out to the IPS LED and the video output window to the projector. I'd probably use the laptop screen for AviDemux/MPEGStreamclip/Photoshop.

It's been a long while since I've posted here, but here's my current desktop. I should do some editing on it someday... A long way from my first editing rig, that's for damn sure. I don't have all the pics of my previous systems like Kionon does, but there have been a few between this one and my first.
Top

I really need to get/build a desk. This is very ramshackle and hard to get in and out of. But my previous set up didn't let me see the projector from sitting behind the computer. I just don't want to buy any new furniture that would be hard to move. Besides, I'd also need to mount my Honda seat on a base or buy a computer chair, and that's more money and more furniture I don't wish to buy. I'm not convinced I can stay where I am after May, 2018, and I want to minimise the stuff I have to move to a new apartment, especially because loading and unloading are difficult in Tokyo. 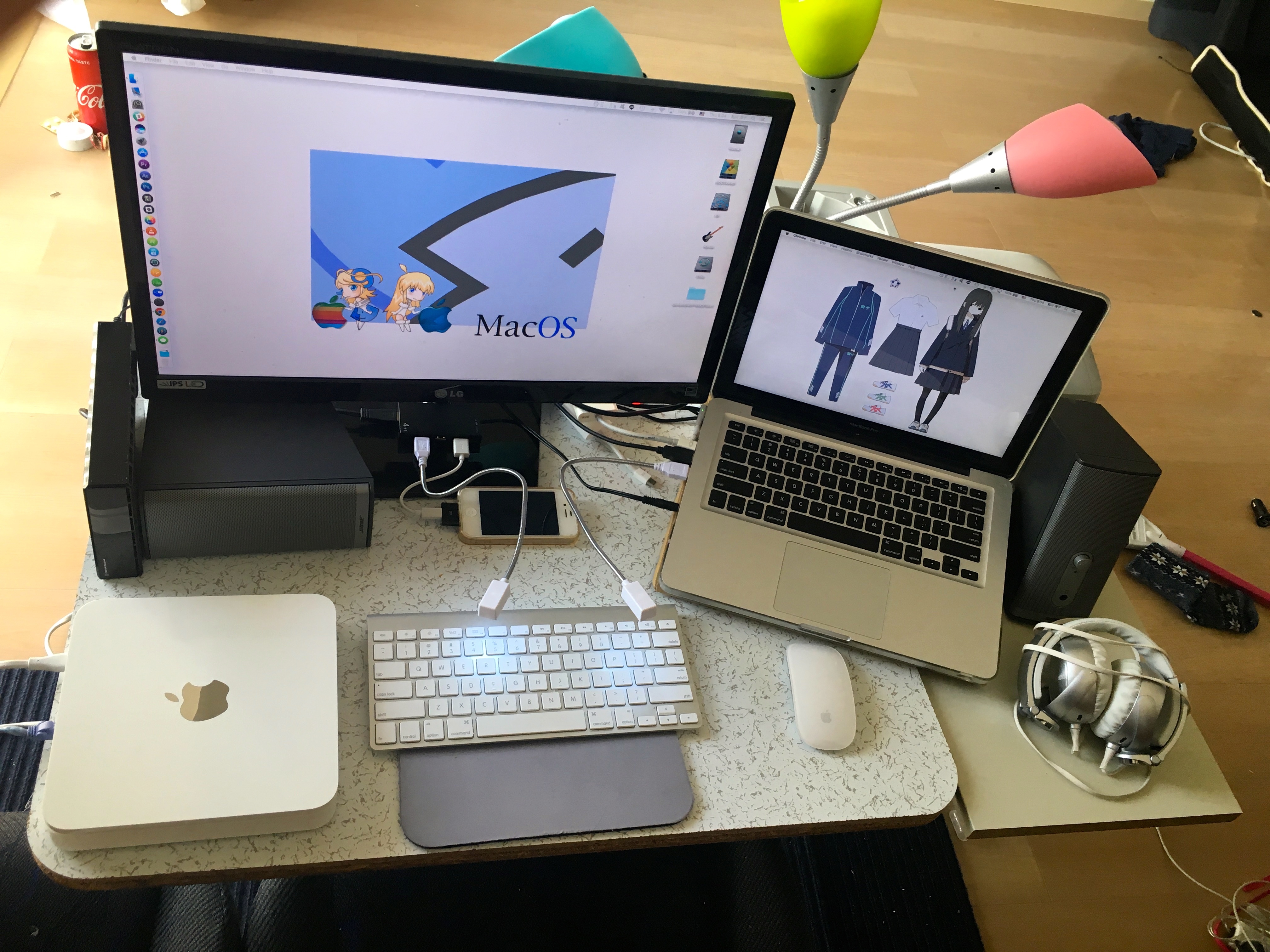 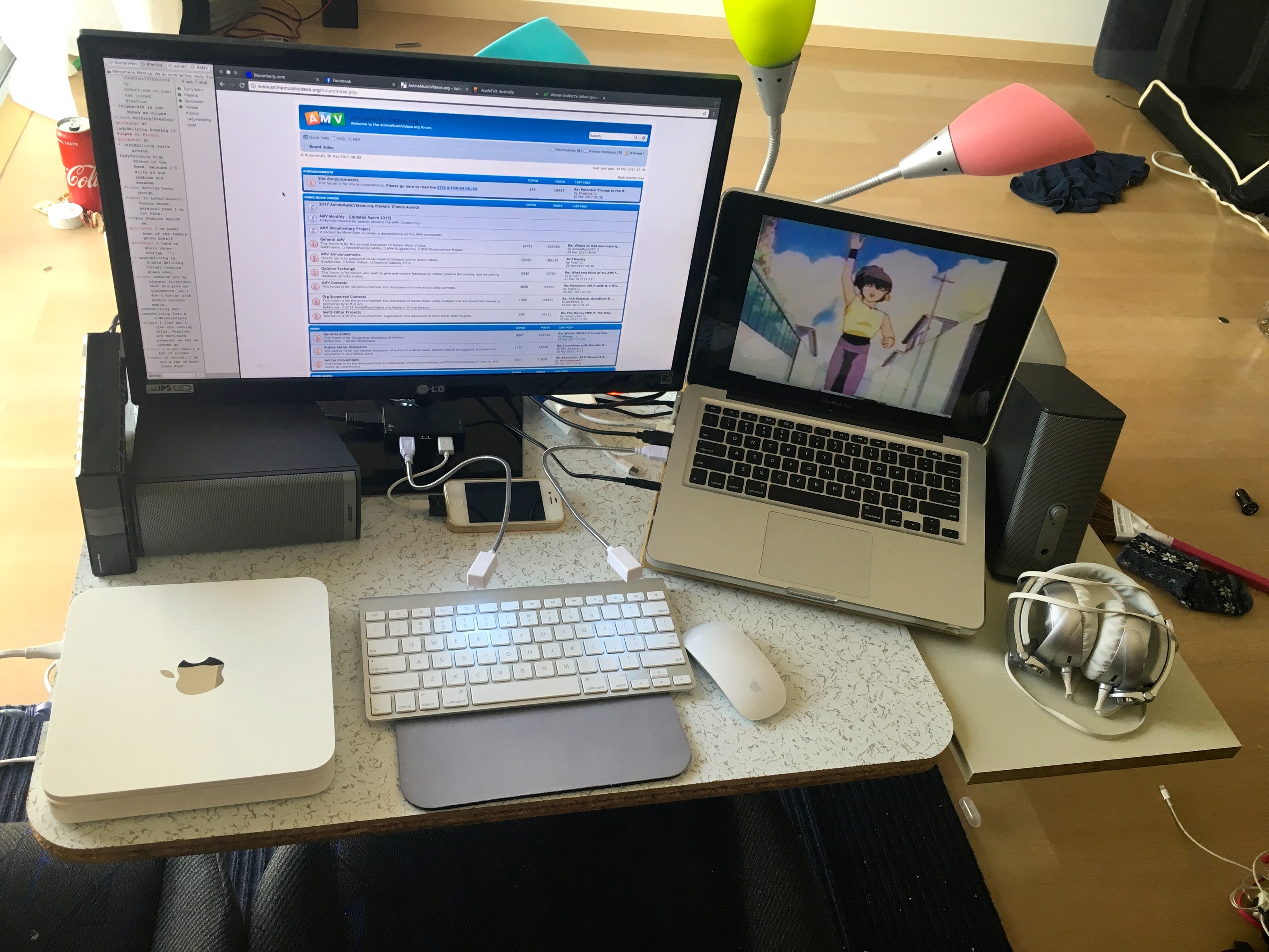 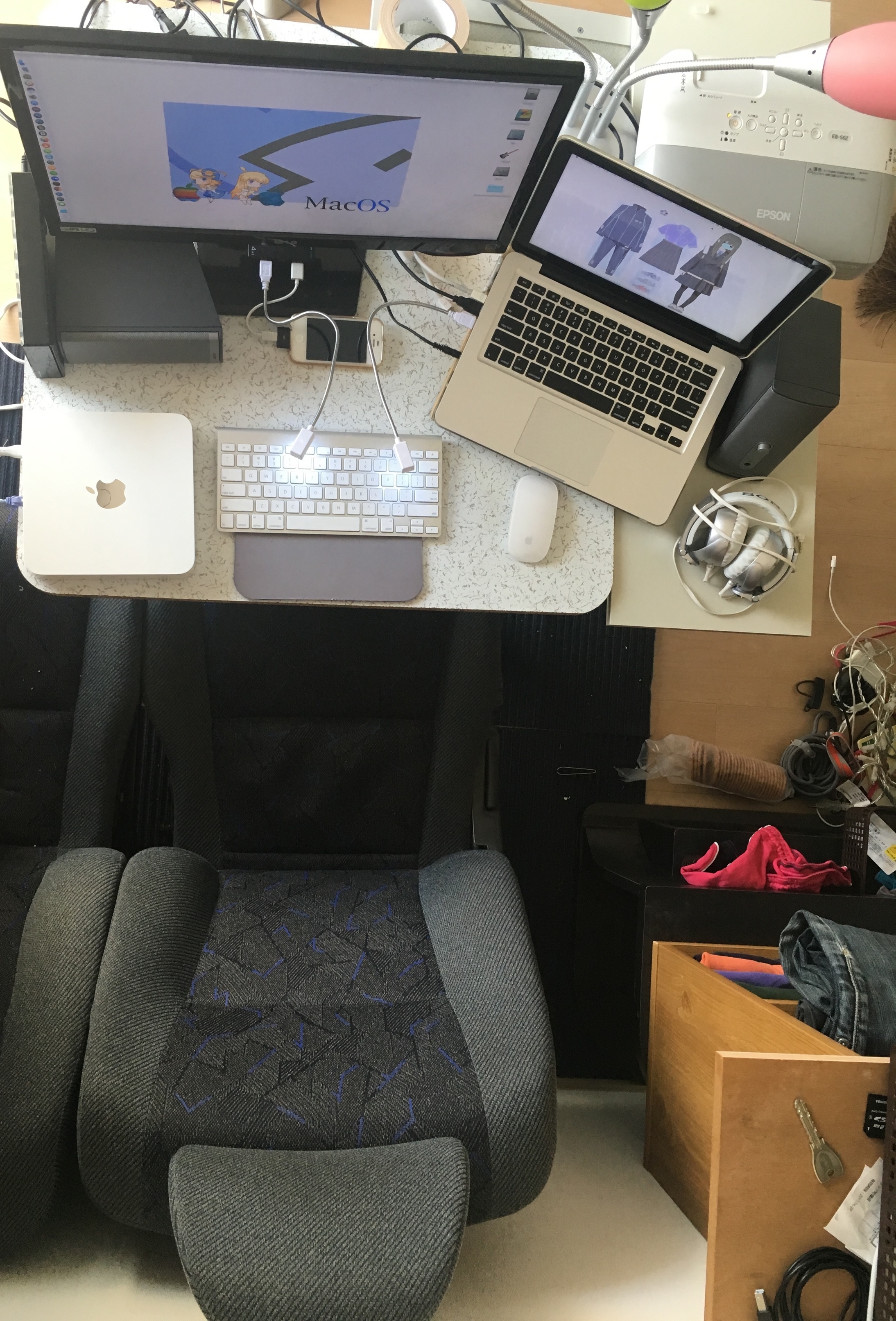 Oh, hi. I added a 2008 Mac Pro with 2 x Quad Core (that's Octocore) 2.8GHz Xeon processors, 10Gbs of RAM, 60GB SSD for MacOS, 320GB and 1TB SATA storage drives for source/scratch disks, and while I don't have a long enough SATA cable, I'll be putting my Blu-Ray drive into the second optical bay, it's currently external via USB. The Mac Pro currently has a DVD-RAM burner already. Currently has 10.11.6 El Capitan but can be patched to allow for macOS Sierra 10.12.x. Graphics are currently an ATI Radeon HD 2600 XT 256MB, but with Nvidia drivers now covering the entire GeForce GTX line, I'll probably get something better eventually.

Both my MacBook Pro and my Mac Pro are backing up to a 1TB Time Capsule, which is also my internet router, both wired (for the Mac Pro) and wireless (for my MacBook Pro and iDevices). I have a wired JIS JP keyboard, wireless US keyboard, original magic mouse, and second generation remote. Also iPhone 6S and iPhone 4 (currently on loan to a friend who broke her phone).

I live in a small studio, so images include stuff that is important to me like my Japanese diploma, some posters, figures, awards (Katsucon and Anime Evolution are visible), animoo source not ripped to Mac Pro harddrives, clothing, etc.

I tidied up and put the Mac Pro on top of one of the desk shelves, and did a decent job with cable management. I moved the MacBook Pro to the exact height for standing. This also makes it much easier to work the projector with the MBP.

I'm working on a piece about my choice of the Mac Pro 2008 in 2017 and what the various options are for Mac Editors, including current and past Mac models, as well as hackintoshes.

Oh shi, a desk that looks like a desk...

New addition is the MSI NVIDIA GeForce GTX 660. That brings up my available monitor support to six. Eight if I include the ATI Rage 2600 XT that came in the Pro (I left it out). The GTX 660 already makes a world of difference in render and export times. Happening tomorrow, 3TB drive gets added to the Apple Time Capsule, the 1TB has been moved internally. Also RAID 0 SSDs because sure, yeah. Also tossing another 250GB Samsung 850 EVO into my MacBook Pro, and then I'm going to RAID 0 that. Back ups of backups onto the Time Capsule. RAM will be the next step. Still only has 10GBs in there. Believe it can be maxed to 64GB, But I've never gone past about 65% RAM usage, so I think maybe going up to 16GB and stopping there will be enough. At least for the foreseeable future.

Yeah, I know. My single LG 23" IPS LED 1080p is too small, too lonely, or both. Plans to buy a 1440p or 4K monitor in the future, but they're just too expensive right now. MAYBE if I scored some insane deal on another 23" 1080p monitor in the back of some Akiba store or something, I might go dual monitors, but right now, it's not a priority vs editing speed and ability.

I won't post my main workstation or my other six computers (I HAVE A PROBLEM. D:) but I wanted to post something else that's in progress. The restoration of my first AMV machine. Of course, it was really a lot of 'firsts'. It was the computer my parents got me so I could use the ATi All In Wonder 128 that I so desired to put video into the computer and edit stuff with. It was also the first computer that eventually became 'mine' instead of the family's computer. I explored a LOT of the internet on this machine (Though it wasn't my first computer with the internet, it was just there at some critical times). Naturally I upgraded away from it and it was lost. Last year I decided I wanted to rebuild it with modern parts so... Off to the internet!

This faceplate, the faceplate for the eMachines eMonster 500a. I wanted it with all the stickers but these were pretty beat up. I had to find a guy on Reddit, who didn't respond to messages, who I then Google-Stalked and added to Steam to make the sale arrangement. It was so low income, he couldn't even afford to ship it until the entire PayPal transaction cleared. During that two week wait he started getting, er, 'inappropriate', so I'm left to 'play nice' and be 'polite' while thinking 'I JUST WANT TO DO A BUSINESS TRANSACTION. STOP SAYING THESE THINGS AND JUST LET US EXCHANGE GOODS FOR CURRENCY LIKE ADULTS. D:' but it finally shipped. And most of the gathered parts. An eTower was bought for the 'donor' as it had a complete case. Look at these beat up stickers. But these are the true cheese of a PC from Christmas 1999. What to do? I also had to modify the new SFX PSU from Corsair. They don't so much make PC components that are exposed steel, everything is painted now. So I had to paint the paint to make the PSU stealth. I spray painted a power supply full of metal containing paint, what could go wrong, right? Right now it's stalled, I've not gotten around to doing Retr0Brite treatment on some of the yellowed plastics and I really need to get around do it. But once it's done everything 'classic' will work. There will be a modern CPU, mobo and GPU inside but the Floppy drive and gameport will work in Windows 10 by using internal USB adapters for those. I even hunted down a beige SATA drive to reshell and install in place of the classic IDE 8x SATA drive.

This won't be my main high end workstation but it'll be a decent i5 machine. A fun sleeper for LAN parties or something I guess?

I'm starring at this stool and trying to figure out what exactly it is other than a stool. It's like an 'Old Lady Cart' was crossed with a stool. Does it turn into a wheeled stool? But their positioning, it's so weird and you'd want caster type wheels for that. o.O What the heck is this thing?

It's a Zuca bag frame with the bag removed, and an additional seat cushion on it.

Kionon wrote:It's a Zuca bag frame with the bag removed, and an additional seat cushion on it.

Oh gosh. My first instinct that it totally looked like a Zuca bag from the wheel placement but without the bag and the full padded seat ontop I dismissed it as incorrect. ...So it looked like a stool that transformed into a dolly or something. D:

Well that answer is more mundane than I'd hoped. XD

This was my first computer that I ever bought. It brought me so much happiness and so much frustration.

I could never bring myself to pull the labels off the front, so I think I just left them on here exactly like this for like 3 years or however long I had it until it bit the dust. It looked just like the one on the right in in this picture. Also, I had an external iomega (?) zipdrive sitting on top of the thing. I was never able to do anything with it besides type papers, download music on Napster and surf the web, but I'm sure it was the computer I had when I first found AMVs and that I probably tried to see how I could use it to get started editing myself (nothing came of this and I'd go through two more PCs before this would finally work out).

This is such a weird blast from the past.
Cutfilm Tovent
Top
Locked
39 posts