what are the absolute oldest AMVs?

This guy was one of the first 200 members registered here and he didn't release a video until this year.

Apparently it's a remake of someone else's old AMV. Can't figure out what that was, though.
Cutfilm Tovent
Top

This guy wrote the 2 VCR editing guide but none of his videos are actually available. I want to see how this method actually turned out! Someone has to have these.
Cutfilm Tovent
Top

This guy wrote the 2 VCR editing guide but none of his videos are actually available. I want to see how this method actually turned out! Someone has to have these.

I remember this studio. Unfortunately, I don't have any of these videos in my archive. At least not that I recognise.

My first AWA was 6, I think. I was at 7. I wore my 13 Staff shirt yesterday, incidentally.

Decided to edit this again, to reiterate, I am a pre-y2k editor, though I didn't release anything until 2001. I joined a radio/television broadcasting group in I think 1997, my first year of high school. I got into AMVs at that time due to Quu and Phade and the FFIRC (Fanfiction Internet Relay Chat), which led me to join the AMV Mailing List under... Omar... I think?

From 97-99, I edited (well we edited) on SVHS deck to deck. Most of these were total experiments. Done when we were goofing off and were taped over. Never saved. We also got a play trinity which let us do fancy transitions and do things non-linearly, it was an NLE, but we still heavily relied on decks for input, output, and we couldn't do much of a timeline at a time. It was also like the size of a refrigerator. I also got a Sony VAIO minitower with Win98 on it in 1998. In 1999-2000, we got two Windows 2000 PC with Premiere 5.1c, I got to take a copy home, and I started messing with software NLE. Yet, most of my footage was still captured from VHS or from DVD from an external drive. I had a DVD-ROM, but ripping was in its infancy. Barely worked. Most of the video you see from my first year in the hobby was made from SVHS or VHS source. Just because we switched to "digital" editing in the 1999-2001...2...? period, doesn't mean our captured source was digital. We were mostly taking analog source, or digital changed to analog changed back to digital source for production. 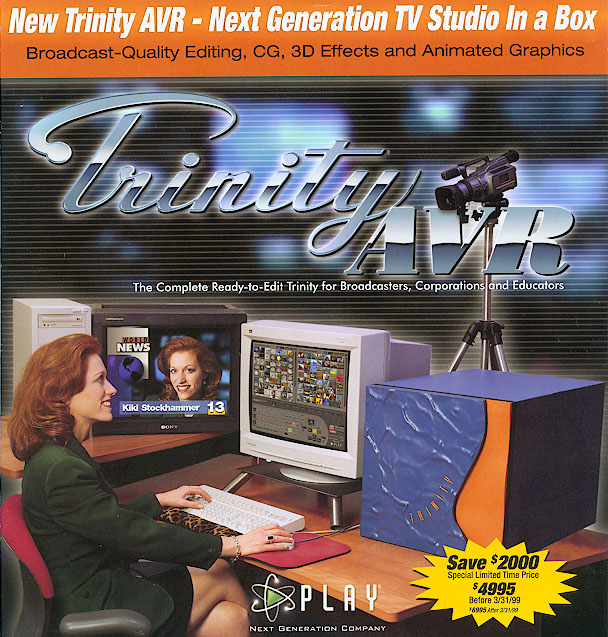