If you have questions about compression/encoding/converting look here.
Post Reply
6 posts • Page 1 of 1

Any testing and feedback that I can get would be very helpful!

Features:
Available on Linux, macOS, and Windows.
Automatically chooses the color matrix based on the existing file or guesses based on resolution.
Easy button for setting up file(s) to be recontainered.
Queue for batch encoding.
Shows bit depth of the currently selected video stream.
Supports encoding of AviSynth (Windows Only) & VapourSynth scripts.
Supports encoding to various lossless and lossy formats, including but not limited to x264 & x265.
Supports multiple audio streams.

Known Issues:
-When using AudioDub in AviSynth, if the output audio codec is AAC it may fail unless the audio is padded (add trim(0,0,pad=true) after AudioDub).

Version 1.0.1.1
-Bugfix for incorrect output locations when using the Configure All option.

Version 1.0.1.0
-Update to the way UT Video is interpreted for auto settings.

Version 1.0.0.2
-Fixed bug for 2-Pass encoding where it would fail immediately.

Beta 4
-Minor changes to the layout and bugfixes.

Beta 3
-Added support for Linux and Windows.
-Fixed bug where it would not look for the output file if not in the same directory as the source.

Wow, nice tool! Thank you for making this!

I'll be waiting for the 10bit conversion.

I can't really see too much difference between using this and using the MKVExtractGUI (+MKVToolNix) and MyMP4Box combo, however I tried converting a 704x482 source with both your tool and my old method, and with the old method it changed the aspect ratio, but yours kept the aspect ratio, so thumbs up for that!

I also think this is very useful for beginners, it's only one program that they need (basically) and it's also easy to use and it's fast, so I also recommended it for others.

If you need help with translation into hungarian, feel free to tell me, I'll gladly help you!
Top

Is that on purpose?
Top

Is that on purpose?

I'd have to see the specs on the original file and what exactly your settings were.
Software & Guides: AMVpack | AMV 101 | AviSynth 101 | VapourSynth 101
PixelBlended Studios: Website | Twitter | YouTube
Top

In AMVTool I did the following:
1. Configure all
2. Recontainer
3. Click no on audio
4. Click yes on the mp4 question (only recontainer videos compatible with mp4)
Spoiler : 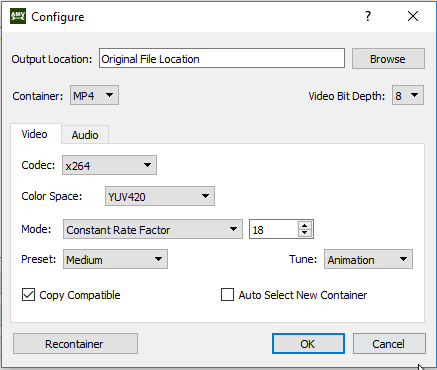 This part is the reason it is doing the weird frame rate change:

That said, it should not change it enough to be an issue, especially for editing purposes. You can also tell your editing software to interpret the footage at a particular frame rate as well.
Software & Guides: AMVpack | AMV 101 | AviSynth 101 | VapourSynth 101
PixelBlended Studios: Website | Twitter | YouTube
Top
Post Reply
6 posts • Page 1 of 1