Posting here as posting on Facebook and contacting the convention directly gets me absolutely nowhere.

I won one of the awards at the contest last year and when I went to ask about my prize I was informed that because only two of the entrants said they'd be at the con, they didn't bring the gift cards and would email us later. Keep in mind I had won a few years ago and was given a trophy so I was a little disappointed that it was going to be a gift card now, but whatever a prize is a prize. Three days after the con I received an email claiming they would mail the gift card to me within SIX MONTHS.

A gift card. Not a trophy or a plaque or something requiring that much time, but a simple gift card. I was confused because... I mean, SIX. MONTHS. But whatever, I'll wait.

In the interim I moved, so I emailed the coordinator to update them. I got no response.

January rolls around. I post on facebook asking what's up, email them. No response. I finally send an email through the website for Matt Daigle himself to respond saying they were waiting for one winner's address and everyone was on holiday so they would send them out later. I again asked if anyone had updated MY address to... well, you guessed it, no response. Why the couldn't send out gift cards to the people they HAD addresses for baffles me, but what can you do.

Now it's mid February. No communication. No gift card. Almost 8 FULL MONTHS after the convention. This is absolutely RIDICULOUS.

I highly recommend that any editors considering entering this year just don't. There's no point to it. You won't receive accolades or any sort of prize and the communication is a joke. Maybe I'll get a response after this because I can't be ignored but, again. EIGHT MONTHS FOR A GIFT CARD, WHAT THE ABSOLUTE HELL.
Top

So sorry to hear they still do this. I won BiS and Best Drama and 2015, never recieved what they promised (which was several hundren lol). So yeah, def dont enter in the future peeps. They just seem to know prize monies sound good, so they just use that to get people to enter and unfortunately, its worked. I hopw they come through for you at some point but yeah its unlikely :/
Top

Haha yeah, I won Drama and Editing and I still haven't seen anything. I've emailed them about once every three weeks, but they only reply every three months with the vaguest possible info back. I don't know if I'll enter again. 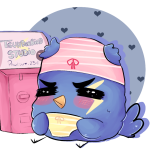 wow. With so many people saying that they haven't received their award/ prizes from as far back as 2015, I'm debating if I should blacklist them from promoting their contest on the org.
MomoCon AMV Exhibitions Director
Top

I got my prize from last year... didn't realize they had such a bad track record.
Reports of my death were greatly exaggerated...

Thanks for the warning guys